Get fresh music recommendations delivered to your inbox every Friday.
We've updated our Terms of Use. You can review the changes here.

The Godz Must Be Crazier (Deluxe Edition) 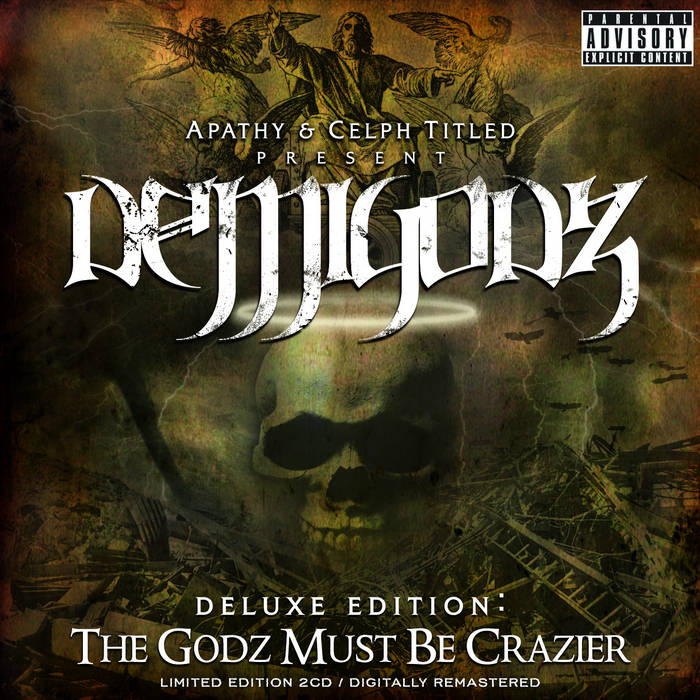 In early 2002, the Demigodz underground supergroup, then consisting of Apathy, Celph Titled, Esoteric, Louis Logic, Rise, L-Fudge, Open Mic and many other skilled MC's went on to release a classic EP with Los Angeles-based Ill Boogie Records entitled "The Godz Must Be Crazy." The release was one of the most popular of that year within the independent hip hop genre, due to its large line-up of star power and strong buzz for frontmen Apathy & Celph Titled. Shortly after its release, the label went under and the CD quickly became out of print and hard to find, despite the high demand. Demigodz Entertainment in association with Endless Recordings now brings you this classic EP as a massive 2-disc remastered Deluxe Edition, featuring 6 unreleased songs recorded in the same sessions intended for the Demigodz full length at that time. In addition to the 6 bonus songs, the 2nd disc contains full instrumentals to all the songs from the original EP as well as the new bonus tracks. This double disc release also showcases brand new original artwork in limited edition form. "The Godz Must Be Crazier" is a classic piece of underground hip hop capturing an early era of an indie goldmine, making this a necessary purchase for heads across the board.

The songs on this album represent an earlier era of the world famous Demigodz family tradition. The line-up of the crew has changed so much over the years, growing from a 3-man group to an almost 20-deep collective during their 10+ years in existence. The additional bonus tracks, not found on the original "The Godz Must Be Crazy" EP, were recorded for the follow-up full length LP to be released in 2003 which never came out, due to label issues and Apathy's then much-publicized signing to Atlantic Records. Members of the crew have come and gone over the years, while its most recent incarnation includes Los Angeles underground legends Styles of Beyond, with MC's Ryu and Tak, as well as their production/DJ cohorts, Cheapshot & Vin Skully. While some have left the conglomerate, such as Louis Logic in 2004, others like Motive have come much more to the forefront of the crew's scope in recent years. The Demigodz will continue to deliver a creative hip hop sound in a time when the genre most needs it.

Bandcamp Daily  your guide to the world of Bandcamp